Skip to content
Home/Artist's Studio/Gold: The Path of a Golden Feather

Gold: The Path of a Golden Feather 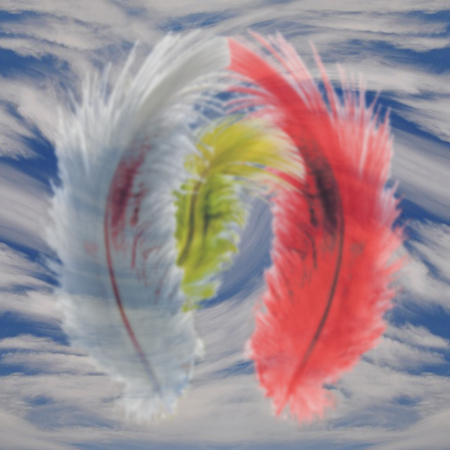 Both had their important steps to follow and both claimed that their steps in the wind were of the greatest joy to the sky. They both honored each other but had difficulties to understand the other’s choice of steps.

“You are so annoying”, said the warrior feather to the white feather one day. “Why don’t you just go and dance somewhere else? Every time my dance wraps the clouds apart to let the sun shine brighter, you complain about me dancing too ruthlessly, go away!”

The white feather went far, far away. For a very long time, she contemplated what had been said and realized that there was some truth in those words. The red feather almost immediately regretted those words said in haste and temper, but done was done and could not be undone.

The years went by and now and then the red feather felt alone. He still danced in the wind, better than ever, and many admired him but few dared to come close to him.

One day, a golden feather came dancing in the wind. The red feather looked because he had never seen the golden feather before and yet, there was something familiar over its dance, but neither of them said anything.

Time passed and the red feather danced his dance but wherever he danced, the golden feather tried to copy his step even if there always was a distance between them.

One day, the red feather was gone and when he came back his color was more pink than red. The golden feather spoke for the first time and asked what had happened with the red feather.

Immediately the red feather regretted the words said in haste and temper and wished it was undone. He did not want the golden feather to leave the same way the white feather had left.

The red feather danced closer to the golden feather that had not moved at all and said, “I am sorry I snapped at you. You touched a wound that is not healed, but you could not know that. Would you like me to teach you my steps?”, the red feather continued.

Now and then the red feather disappeared for a short while and every time he came back, his color was more pink than red. The golden feather never commented on it again, and just stood still in the wind, waiting for the dance to start again.

One day the red feather said, “We have been dancing my steps for a very long time now my friend, but don’t you have steps of your own that you long for to dance?”

The golden feather did not answer at first, but after a while it said, “That subject is a wound that is not healed, but you could not know that. Let us continue to dance.”

The red feather contemplated the golden feathers answer for a while but said nothing more about it, and the dance continued as before while the years went by.

One day the red feather said, “We both seem to have wounds to heal, and I wonder if you would consider to help me heal mine?” The golden feather looked surprised, but answered immediately that it would be a pleasure to help with such a task.

The red feather said, “You see there are some steps I want to learn before I can seek forgiveness for something I did a long time ago. I try and try but for some reason I can not get them right.”

“I even change my color to white while practicing to give me more inspiration. That is why I always look a bit pink afterwards. It takes a while before all color disappears.”

The red feather that now was white started to dance some very different steps than he used to and after a while the golden feather joined him. They danced the new steps for quite a while.

“It is easier to dance these steps together with you”, said the red feather. “You seem to be a very fast learner. It has taken me many years to come this far and you have almost learned all steps already.”

The golden feather said nothing, just smiled a sad smile and continued the dance. Afterwards the red feather was pink as usual for a couple of days, and then it all went back to normal.

The years went by and now and then they practiced the steps red feather wanted to learn and one day he said, “It feels like I almost know the steps in my heart now. I am very grateful for your help, golden feather. Without you, it would have taken me an even longer time.”

Golden feather bowed and said, “Also I am grateful. This practice has started to heal my wounds too.” Red feather did not really understand, but decided to say no more.

Next time it was time for them to practice together, golden feather asked if they could do one thing different this time. “Of course”, said red feather, “what is it you want to change?”

“Would you mind if I paint myself white and you stay red? It would help me to finally heal my wounds.” Red feather felt the wound in his heart open up as never before, but decided to agree in order to help golden feather heal its wound. If that pain was the price he had to pay, he was willing to feel that.

Golden feather painted herself white and started to dance. Never had she danced more beautifully than now, with red feather at her side. Red feather danced and looked and danced and looked, and suddenly he felt the truth in his heart.

They danced until all the white color had disappeared from golden feather, and then they stopped and looked at each other for an eon. Totally still in the wind, feeling the love in each others hearts.

“I promised myself to seek for you and apologize, but I wanted to do it by dancing your steps”, said red feather. “Why are you golden and no longer white”, he then asked.

“I took your words to my heart and, just like you, decided to apologize. I also wanted to learn your steps, so I could learn to know your heart better and be a better friend.”

“Therefore, I asked the creator to change my color to gold so I could get to know you once more and be your friend once more.”

“The creator does not normally do such things but said that friendship anchored in love is the greatest force there is and that peace between two hearts can make peace in all of creation.”

They both smiled and started dancing. Soon their steps were so intertwined that a whole new dance came forth.

And as far as I know they are still dancing together and will continue to do so as long as creation exists.