When Identity Divides Us 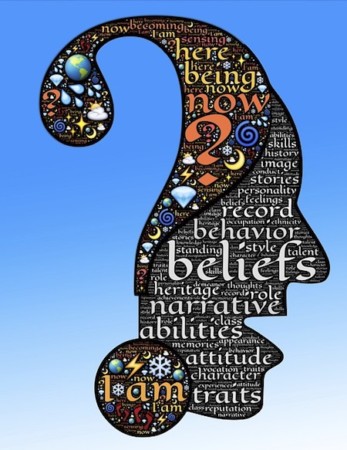 How Do We Choose to Identify Ourselves?

This question has been on my mind lately, with all the chaotic unfoldments in the world, and all the media messages pressing to hook into our personal identities, be they about political affiliations, gender, religion, nationality, race, or any other thing for that matter.

I think most people don’t even have a clue how much these identity choices are choices.

I observe that most folks just assume identities based on what is mostly unconscious and unaware beliefs systems. I think the percentage of people who’ve ever taken the time to really reexamine the nature of the choices they make about personal identifications is probably depressingly small.

The truth is that none of these identities are who we are. At best, they are subconscious attempts to make static or real concepts that are far less demanding and also less powerful and flexible than simply being the best we can be in each moment with whatever presentation we have in our embodiment.

Choose a tag and pin it to the front of your shirt and you’re done for the rest of the process? I don’t think so. But this is metaphoric to what happens when I choose an identity and square off in a polarizing way with others that choose some other one for themselves.

I’ve had plenty of people point out to me that I can’t imagine how it is to be tagged with an identity without my will, like that of a muslim woman wearing a head scarf, or like that of a black man in the racial inequity of the US on so many levels.

Of course, this is quite true, and at the same time, I also get tagged by whomever wishes to do so all the time, as a white woman who doesn’t have a clue and therefore probably doesn’t give a shit.

Maybe I don’t choose to be tagged (with what is essentially a descriptive phrase) as such based on the color of my skin. Maybe I don’t wish to be tagged as someone who doesn’t give a shit about the experiences of others based on the assumptions that go along with this description. Maybe I don’t really feel the entitlement that is assumed by those who aren’t having the experience I am with my lily white skin. I’m not saying that there isn’t inequity, I’m saying I haven’t chosen it and I’m not happy about it either.

The truth of my heritage is something decidedly not that white. This is hidden by the genetic combination that brought me out of the womb with white skin, but research into my ancestry shows most of my DNA came from either American indigenous peoples or from the indigenous races in the Arabian sub-continent. Either American Indian or to a lesser degree Arab. Go figure… And, who cares??

So, then, who am I? What if I don’t choose to identify with any of my heritage more than any other part? What if I choose to consider all of the peoples of this planet, in such awesome and gorgeous, colorful diversity, as my kin?

As I see the political party game to be utter bullshit and just a way to run human cattle through a chute, I can’t even properly speak to these kind of identity choices in a personal way. All I can say on this is, I find it completely bizarre that people will choose these sorts of affiliations over other people. Particularly when the evidence is so clear that the only difference between them is in the flapping of lips and at the end of the day, they all serve only themselves and the Big Money interests that pay them to make the choices they do.

The current levels of attempted manipulation of people using various hooks designed specifically for the various identity choices made from the deeply unconscious masses is truly nauseating. Even with all the evidence of big money players funding violent protests all over the planet, folks are still so ready to ditch their humanity to other people based on some artificial and surface level identity profile.

Honoring Sovereign Choices of Others

From what I’ve been witnessing, these identities are so important to some as to wipe out the ability to reason and to simply talk with one another, human to human. It deeply saddens me and also just disgusts me too, but I get it.

This is the part where I’ve always had such a big problem on a personal level. This is where I want to push and shove in order to change the sovereign choices of others, which I see as being at the root of the problem and as being the core of what separates us from one another. What separates us from our own humanity.

The only thing I can do that’s in actual alignment with the Divine Principle of Free Will is to honor these choices that aren’t mine to make in someone else’s space. It’s truly difficult to do, but it’s the only loving way to proceed in my view.

That it’s painful and fills me with grief is not anyone’s problem but my own and I own it. I’m sad when I perceive someone tags me with an identity that makes it OK for them to ditch me in ways I don’t actually deserve or choose at all. I accept this is so and go on.

At the Core of Separating is Identity Choices

These shifts in consciousness don’t happen for anyone based on what I know is at the core of the separating choices or behaviors. We all choose these artificial means of separation and no one chooses them for us. Despite those that say this isn’t so, this is the truth of it.

These identity choices may be pushed on us in overt and covert ways, but no one can force anyone to eat that shit sandwich, I don’t care what they do. When we wake up and find we’ve been dining on shit, we can choose again and choose not to eat it.

I understand that it isn’t easy. It isn’t easy for anyone, no matter what, because it comes down to a personal responsibility issue. Never the most popular concept at any gathering.

Although I do know some other folks who understand what I’m talking about here, it feels like a lonely place to be if I hang out in places like social media hubs. Perhaps it’s just that the ones with the loudest and longest squeals are the ones that feel the need to bring even more separation to bear on our humanity, as if this is the magic that will make it all better. I’m here to say that what will grease those wheels isn’t what will bring us together and heal these artificial divisions we’ve chosen to identify with.

I can’t say I have the once and for all cure-all either. I can only say it doesn’t appear to me to be a good thing to fail to talk about it openly. Either we will wake up and begin the process of making different and more consciously loving choices or we won’t.

I’ve spent enough time on a personal level with myself and my notions of identity to know the difference between what I choose on a conscious level and what tries to choose for me in the form of dubious social and cultural programmings, and in terms of attitudes reflecting the choices of others to tag me with identities they choose for me.

I invite everyone who actually cares about the fact that we, as a human kingdom on this planet we share, may be sliced and diced based on manipulations designed to divide us, to discover for themselves what they choose and don’t choose as their personal identity. Consciously. Here and now.

I choose not to have affiliations to identities that divide me from others. I choose to disregard the reflections of the tags that others choose for me against my will. In sovereignty. In compassion. In self-love and love for the rest of humanity too.