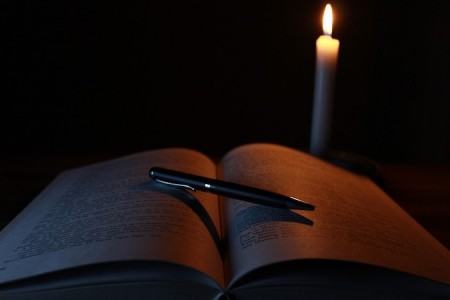 A question about our history, do we pray or are we prey, or can we be both?

There are many branches on the history tree. One tells us about a young couple, wearing very little, happily munching on an apple. That was a no-no and they were shown the gate.

Their task was to atone for tooth marks in the apple and populate Gaia. The poor girl must have been permanently pregnant with litters of little people.

According to the many authors of the books of instructions, their worship was reserved for God, the Source, and the Angels kept them on the straight and narrow. Then, they killed the boss’ son and wrote a new book, ultimately appointing a leader by election.

That’s the Democratic way, every one has a voice and nobody listens. At this point mendicant’s lay on the floor arms, stretched out and so very vulnerable. Mumbling a promise to obey the head honcho and throwing in the Source as an after-thought.

Now we are told about another branch on the History Tree, and this tells the tale of a bunch of
Galactics looking for a home base to be kind, caring, just and look after Gaia and her population of all body shapes and size. Gradually the Visitors forgot why they came to Gaia, because being prayed to by the prey was fun and they milked it for all it was worth.

Meanwhile, back at the Ranch, the real Source was a bit ticked off with the way things were going. Calling all Angels and Galactics that had stuck to the script, they discussed the PLAN! The pace of change was to be picked up and while they could advise when asked, they could not TELL you  the prey direction you may travel. The Devic Kingdom and Elemental souls were briefed,

War had been discovered and developed into a wonderful money-making scheme, not for the social base, however, they did the maiming and dying. As Labour laws and lack of money and education had reduced them to the level of slaves, it was fairly easy to convince them that they were killing people for King, President and Country. Churches of all ilk and State were all hand in glove (so they didn’t get blood on their hands}.

Gaia’s population was suffering from a kind of collective Altzimer’s brought about by the Gods of Money, Power, and Greed. Greed was GOOD and selling small communication devices to everyone increased profit UNTIL the discovery that the preyed upon had wriggle room for instant data transfer and information and disclosure.

All part of THE PLAN! I bet you didn’t know that Source had a degree in communication. The internet allowed Angelic and Galactic workers to speak to the ground troops known as Lightworkers and show the Starships all over Gaia in all time frames. We shouted from the rooftops, to anyone who would listen, and those who didn’t want to insisted we had a medical problem.

Movies were made with boogyman Aliens here to take over the world…treated just as entertainment, because Gaia was on her way to being rescued, and millions knew their real History. Promises were made of solid granite, not at all like the ‘gods’ promises, that are like pie crust, made to be broken.

We can look forward to a whole bunch of benevolent entities busy reaping and sowing to provide resources for the ex-prey. Close your eyes and watch history being made, resulting in a lack of hunger, roofs over homeless heads, no more groveling to self proclaimed Masters, no racism. You see, Love conquers all and the proof is in the pudding, and we will all share it.

Pray, ‘cos we are not Prey.

About the Author: Dawn Bellamy

I was manufactured in Scotland, assembled in England, and exported to Australia. I have been a Soldier, Weighbridge Operator, Public Servant Clerk, Division Controller in the Emergency Services. I am blessed to be associated with the Gaia Scene Forum. I take delight in learning and growing, remembering and actively participating in dimensional timelines, and events. We live in exciting times... You can read more about me on Our Family page.