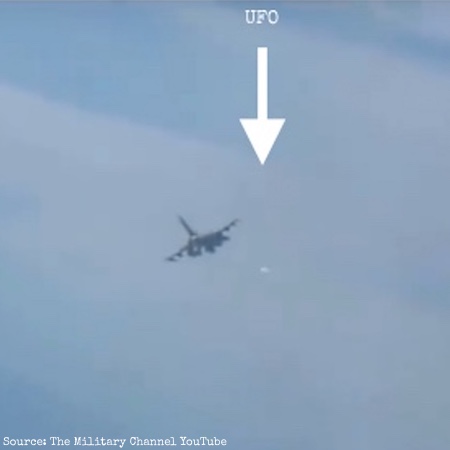 On April 5, 2018 Q Anon posted a link to The Military Channel and a video titled US Military Power 2018 • “The Leader” • US Armed Forces: The video contained UFO footage.(1)

At 1:11 minutes:seconds, two United States military planes are flying through the sky. The camera appears to be inside a fighter jet, and is pointed towards a large military plane. The view is from within this jet, looking at the plane.

As the fighter flies, a clearly seen UFO passes from in front of the first aircraft, across the sky and is about to pass in front of the plane when the video cuts to the next scene. In the next scene, two crew are assisting the launch of a military jet and give the thumbs up signal on preparation for launch. The thumbs up appears in the exact location on the screen as the fighter – UFO combination.

In this article we will first discuss the UFO and then present a series of screen shots showing the UFO traveling across the sky. After the photos we will discuss an interesting related Q Anon post that came out as I was writing this article this afternoon.

Observations About the UFO in the Video

Visually this appears to me to be a UFO that is galactic in nature. It has the shape, feel, color of light and speed that is common with UFOs that are galactic.

However for me the biggest confirmation for me that this is a UFO is my inner guidance and intuition, which says that this is a representation of the galactic presence assisting our military and humanity and the Earth in winning our freedom.

Is this UFO Working in Coordination with the Military Presence?

In my view, this video is showing a coordination between the US military presence and the galactic presence. I say this for several reasons.

The UFO Flight in Front of US Military Aircraft: Photos Illustrate This Important Event

The following sequence of seven screen shots illustrate the path of the UFO and the subsequent thumbs up ‘message’. I have added an arrow to help you track the UFO. Trace down from the arrow until you see a bright and small dot in the sky. In the video, this sequence occurs at 1.11 (minutes: seconds). 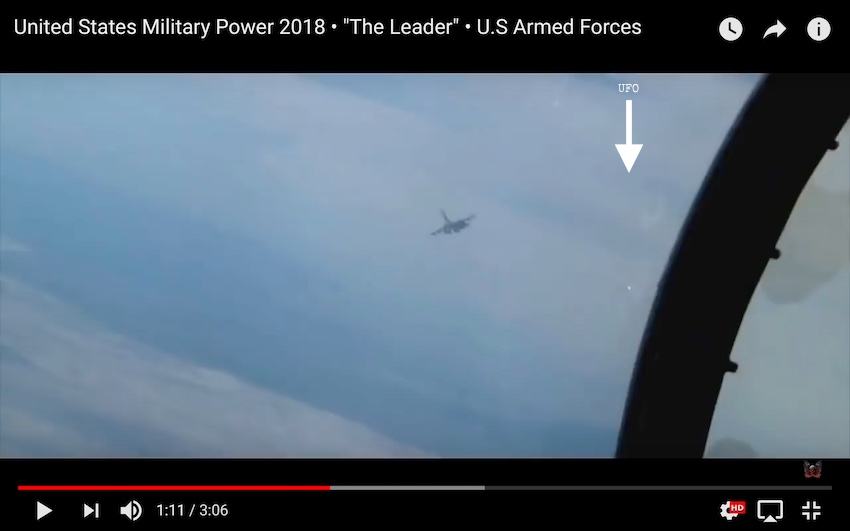 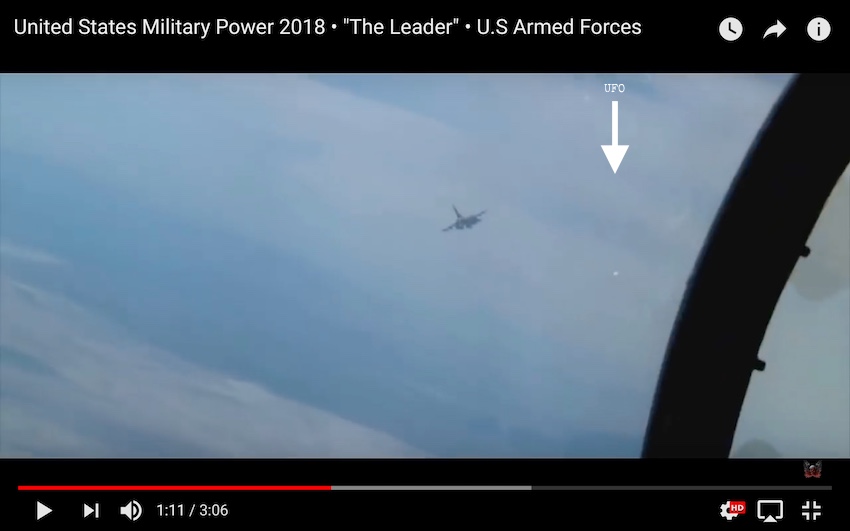 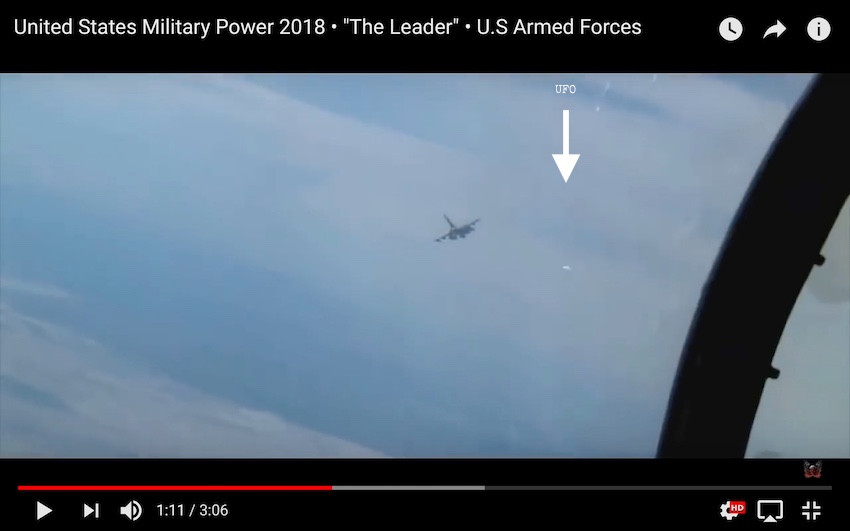 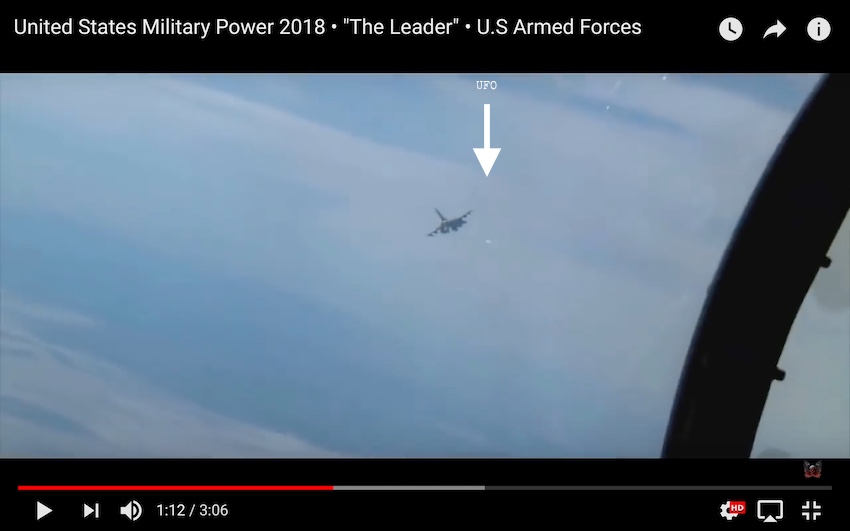 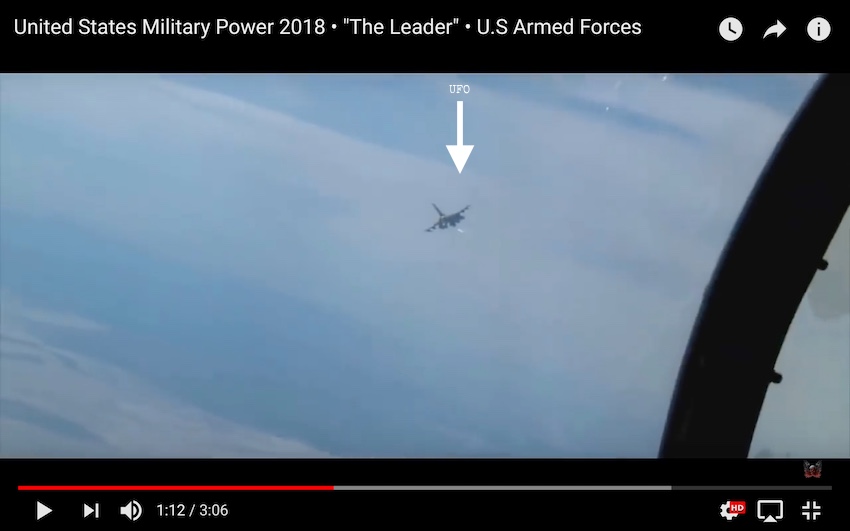 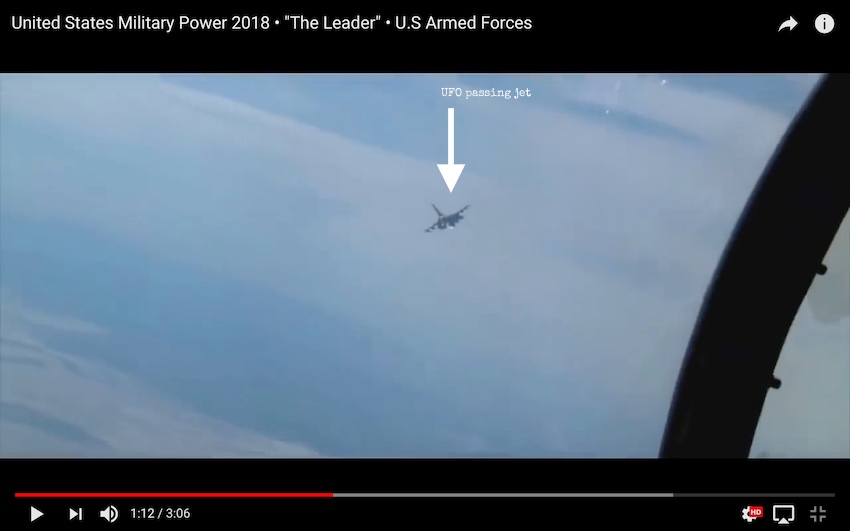 I have circled the ‘thumbs up’ that is in the exact same spot as the UFO passing the aircraft (from the previous/above frame). 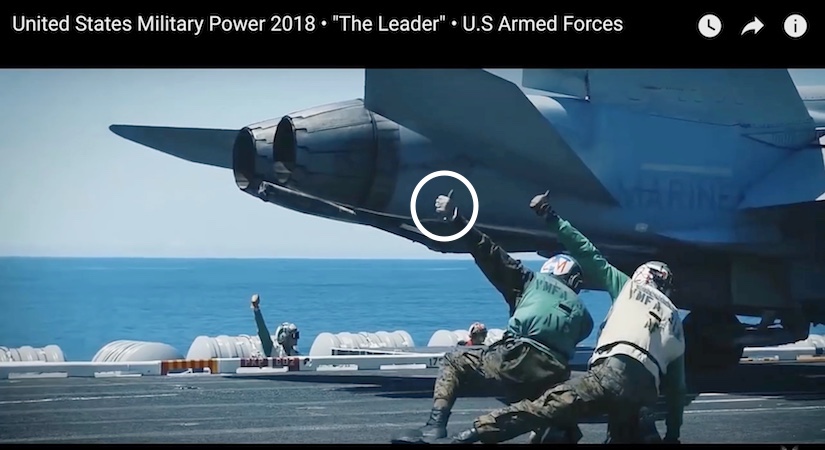 To my amazement, I found out while I was writing this post today, that this afternoon Q Anon referenced (reposted) an anon comment regarding extraterrestrials (#1143). The posts were as follows: The anon first made a comment on a Q Anon post #738 from February 11, 2018. That Q post reads as follows:

Understand one simple fact – the US is connected to the rest of the world.

Knowing that, understand, by default, if certain intel is released it would cause a WW/mass suffering.

We share the idea of open source but value life and must make decisions base decisions on outcomes and containability.

The anon comment under this Q reference was, ‘To my fellow incarnated extraterrestrials, how could I have forgotten this crumb.’ Q referenced this post by ‘reposting’ it to the Q Anon archive this afternoon, with no added commentary. Given the content of #738 from Q above, just this referencing alone was a big acknowledgement.

Thank you Q for confirming what is in the hearts of many of us.

(1) Please note: All jet/plane/UFO photographs in this article are still shots sourced from The Military Channel and their video titled US Military Power 2018 • “The Leader” • US Armed Forces.

(2) I do not know what kind of jet this video is taken from within, however for example the average speed of an F15 is 570 mph (source: https://www.globalsecurity.org/military/systems/aircraft/f-15-specs.htm).

Video footage used is public domain and falls under rules of Fair Use. We are making these materials available for the purposes of criticism, comment, review and news reporting which constitute the ‘fair use’ of any such copyrighted material as provided for in section 107 of the US Copyright Law.

Please click to join my Solaris Modalis Star Crew to receive my Monthly SolarisModalis Newsletter along with special messages and content!

If you love my work and wish to be an integral part of the Solaris Modalis mission, please

Article written analysis © 2018 Solaris Modalis. All Rights Reserved. Permission is given to share this article on other blogs and websites as long as the text is posted in its entirety without alteration and with the accompanying photos, and with the author’s credit, copyright and live website links included in the article.

Check out the blog and more photographs at SolarisModalis.com.