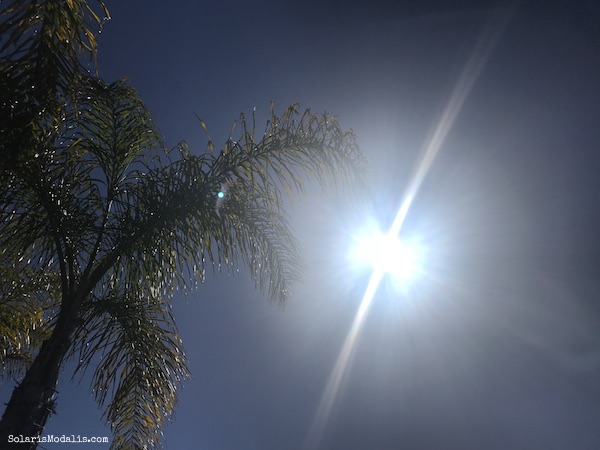 When I started this blog, I thought it would be all about the sun. Hence the name Solaris Modalis – ‘the way of the sun’ or ‘the mode/method of the sun’, in Latin. This name came to me in meditation as I was considering starting blog, and the name inspired me.

A year later, two coincidences happened that confirmed to me the name I had chosen for my blog about the Sun. The first is that I went to a spiritual conference and a woman told me that in her personal communications with Archangel Michael, he had told her the new name for our Sun was Solaris (from Sol). A couple of months later, I had a Skype call with a woman I deeply admire, who was using the name Solaris for our Sun during our discussions.

For me, both of these connections told me that I was perceiving a much broader trend, one that I wanted to participate in and to be a part of.

I started taking photos of the Sun upon returning from Ireland, where I had lived for about three years. Having been away from California for so long, I had almost forgotten what the warm sun on my skin was like! My body deeply long for the warm touch of the Sun.

One day, I was taking a photograph and my camera happened to catch the Sun in the photo – and on that day, in the photograph, it happened to be streaming huge rays of sunlight out it’s sides. This seemed unusual and stunning.

So, I started pointing my camera at the sun, to see what it would look like.

As I started looking at the sun through the camera, I started to notice it’s changes. The sun was a different shape often times, and a different color than I had remembered as a child. I take photos almost daily of the sun to track its changes, and you can see those photos here at my Today’s Sun page.

The Sun and Orbs as Representatives of Soul

A few years ago, I read an article by Robert Shapiro in the Sedona Journal of Emergence. One of the things Robert Shapiro writes about is his conversations with off world species. For example, he will see a UFO craft in the sky or in a photograph, and then connect with the entities of that craft and interview them.

I remember one article in particular where he was talking with a race of ETs about how human beings can not remember past lifetimes, and also about the shape of their craft. Robert was saying that humans perceived the craft as round balls of light, while the ETs were saying their craft had a different shape than that in actuality. In the conversation, the ETs suggested to Robert that because humanity was disconnected from itself, it’s Soul, and it’s own memories, that we perceive galactic craft in the sky as bright orbs of light as a reminder to ourselves about our inner connection with our own Light and our own Soul.

Meditating with the Sun

I thought this was an interesting suggestion and it made sense to me. Later, when I was studying quantum physics and spirituality, I also began to see the Sun in our sky as representative of the light of my own Soul.

I have found in spiritual practice that this is a part of the process of expanding consciousness and awakening: First we perceive what is outside ourselves, and we learn and play with that. Eventually, we understand that this is a representation for what is really going on inside ourselves. Then, the work gets interesting, moving my attention within and seeing what is there inside my own being.

I began to receive inner guidance about meditations I could do with my heart, the Sun and the heart of Earth – Gaia. I still do these exercises today and I also teach them to others. These exercises both ground me and expand my own connection with my inner light and my own Soul.

As I developed a spiritual practice and learned to do energy work, I came to see the Soul connection in the heart as the ‘inner sun’. That’s what it looks like to me, clairvoyantly. Thus, for me, following the way or the path of the Sun is akin to following the path of my own Soul.

Interestingly, Scripture says God gave his only son to humanity. What if that gift of his ‘son’ was also a gift of the divine spark in each of our Souls? This is part of what Solaris Modalis means to me – following the inner sun – the way and the path and the inner guidance of the God spark of divinity inside my own heart.

This month (June) the Sun has gotten unusually stronger, relative to the Sun’s light in the spring here (March through May). I have been taking some striking new photos, and the featured image above is one of these. Pretty amazing isn’t it?! I love getting shots like these.

I have found that this is the case, over the years that I have been almost daily looking at the Sun – it is stronger and visually (through the camera) emitting stronger rays from Summer (in the Northern hemisphere) into the Fall.

Over the years, I have also developed a habit of checking the solar weather, usually daily. When the geomagnetic storms are strong, for example, friends will be complaining about headaches, and I will pull up my charts from online and show them the weather, and explain how the Sun effects the geomagnetics of the atmosphere, and in my view, of the human body also.

Solar flares are a key indicator also, and in my view, correlate with expanding consciousness – they create the energetic effect of ‘poking’ human beings in a way that invites us to expand our energy fields and awaken.

Another key indicator is the Schumann Resonance. I have, in particular, noticed the expansion of the resonances during times of key traumatic events on the planet. Key examples would be after false flags, after the Hawaii missile alert (January 2018), after dramatic news that effects broad swaths of the human population – you see the light come in and expand in these situations.

I’m going to put links to the resources I closely follow, below, so you can follow them too if you wish to. Importantly, I have found that there is not always correlation between the sun’s visual changes (in photographs) and these key indicators.

Many times, I will get extraordinary photos of the sun, as the one above, and there are not data that can show my why it is changing, or what the cause is for it to look this way in the moment. What I believe is that there are radiation and other energies being emitted by the Sun that we might not yet have discovered or are aware of scientifically.

I feel this is an area ripe for scientific investigation, and for the pondering and questioning of our own hearts.

Daily Photos of the Sun

Frequencies of the Schumann Resonance

Amplitude of the Schumann Resonance

Q Values of the Schumann Resonance

This data is from the Laboratory of X-ray astronomy of the Sun, Lebedev Institute, Russia (solar flares and geomagnetic storms) and from the Space Observing System in Tomsk, Russia. To translate the pages into English, simply copy the addresses above into Google translate. I prefer to look at the data from these Russian sites for a simple reason – their charts look prettier!

Please click to join my Solaris Modalis Star Crew to receive my Monthly SolarisModalis Newsletter along with special messages and content!

© 2018 Solaris Modalis. All Rights Reserved.  Permission is given to share this article on other blogs and websites as long as the text is posted in its entirety without alteration and with the accompanying photos, and with the author’s credit, copyright and live website links included in the article. All photographs and videos created by Solaris Modalis are not retouched or manipulated:  color edits to images are specifically indicated if presented. Check out the blog and more photographs at SolarisModalis.com.