The Archetypes of 2021 Revealed 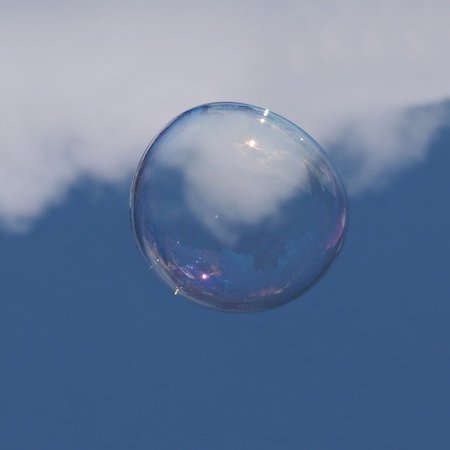 For the past few years, I have used my trusted Tarot deck to guide me to predict, through those age old archetypes, what the theme will be for the year. This year, I have also done so, and I have taken a different approach to doing so.

In brief, I’ve asked in three slightly different ways for this woo-woo magic to appear via a card coming out of a deck for me to consider.

This article will be discussing this process and what it has revealed to me. In detail, let me go back to last year for a moment and tell you what I found happened with that read.

It was first off, in my current estimation, off a bit simply because I pulled the card, not for the natural year (beginning at the new moon in Aries), but for the artificial year of ‘2020’.

This year, I have done a correction to this by reading the actual year according the natural timing of this planet within this solar system within this Universe. I know this sounds finicky, and yet, it becomes more and more important now to suss out the difference between artificial realities and real ones.

In the second place, in past years, I simply did a read based on my preferred perception base, which is all about those who are consciously and intentionally busy with walking in mastery.

I’ve made some adjustments this year to look at this from slightly differing perspectives. I hope it brings forth more clarity, and I believe it will.

I first used the entire deck in this first round to bring out the ‘mundane’ or ordinary overall theme for this year, (which I will refer to from now on as 2021, for the lack of a proper way of saying it simply, though it is actually from the first new moon in April until the next one in the following April). 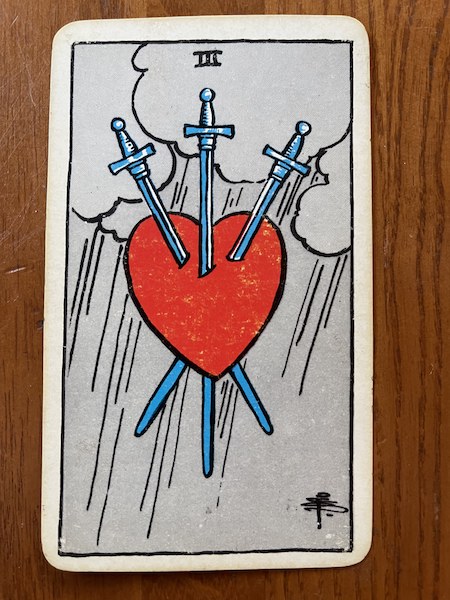 This card represents heartbreak. Deep and wide and potent.

Given the question was about the theme for the year in the most ordinary or mundane sense of the collective experience, I can predict that this coming year is going to be filled with grief for a lot of people.This is not exactly good news, and yet, let’s tease this out a bit more.

There are two kinds of heartbreak denoted by this card. There is the heartbreak that happens over loss of something deeply cherished. This can be a person we love, and it often is.

It may also be related to cherished belongings or places or even philosophies. An essential loss of ‘innocence’ is one of the factors that is not only indicated, but will certainly be present when Three of Swords is involved.

Secondly, there is the heartbreak that happens when cherished illusions reveal themselves to be untrue or unreal. This type of heartbreak produces grief that is just as potent as the first variety, and yet, it’s important to note the difference.

Either way, the grief and the grieving is going to be a theme this coming year for the overall collective consciousness we all share. This grief is profound and real, no matter the ‘cause’.

Stepping up the question on the second round of the reading for the collective consciousness of 2021, I was looking for one of the Trump cards, in order to get a handle on the Divine Archetype for this coming year. Out of only the 21 Trump cards in the deck, I pulled one. 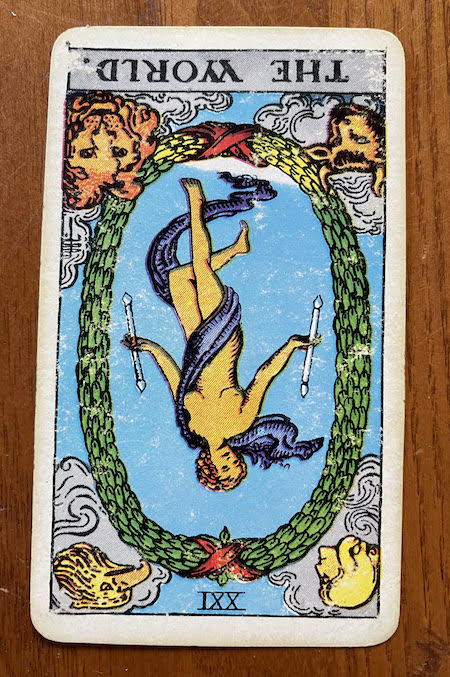 The keyword here is fulfilled, in an upright position.

This card is the ‘last’ card of the Trumps in the deck, suggesting it is the conclusion of a natural cycle in a process, a pilgrim or hero’s journey. Remembering this is an important factor to looking at what this theme for 2021 actually reveals. Because it denote the last of the cycle, what we see here is the harvest, in a very real sense, of a long journey in our collective.

So, to have it appear reversed speaks to the opposite of this experience. It reveals what is out of order in the world, and to the experience of what is vibrating this disorder and creating dissonance and chaos for the collective, as a theme, as an overall or over-arching dynamic.

The previous card of heartbreak and grief makes a whole lot of sense now, with this addition to the mix. As it is revealed in such a powerful archetypical way (and so broadly to all the population in these times), how the world is broken.Therefore, we have broken heartedness over it. Some of this broken heartedness is based on realities, and some of it is based on the busting of cherished illusions based on protecting us from harsh truths, but either way, the grief and grieving is real enough.

The challenge here is to grieve it out and to find the balance again in consciously knowing what is and what is not life-enhancing. The World is all about LIFE. Flipping this card to the right side again takes the courage to get real about what works and what doesn’t, what has life-enhancing values versus what is anti-life (death worshipping).

We are tasked with great challenges to our mastery right now and no kidding around about it.

In the third phase of this process, I again formed a slightly different question, pulling another Trump card to denote the theme for those present now in these times who are ready and willing to step up and into their mastery of their own human self, seated in access to Divinity, boots on the ground.

This differs from the question about the overall experience of the collective, since the foundation of where the perception is based or placed, in this case, is founded in spiritual principles and in intentional ones, as in, intending mastery and funneling through the human experience the Divinity we are formed from.

While this may sound to some as some snooty high-sounding spiritual snobbery, it’s actually the most nose to the grindstone hard work to intend and to attempt to achieve this sort of mastery.

Yet, until we do attempt it, and really mean it, who will ever achieve it? Besides no one! This may only be attempted by those who raise their conscious intentions to it, and who can find they care enough to consistently devote themselves to this task, step by step and moment by moment.

So, for the sake of those who intend for and walk in whatever mastery they can manage in each moment, here is the Divine Archetype for 2021. 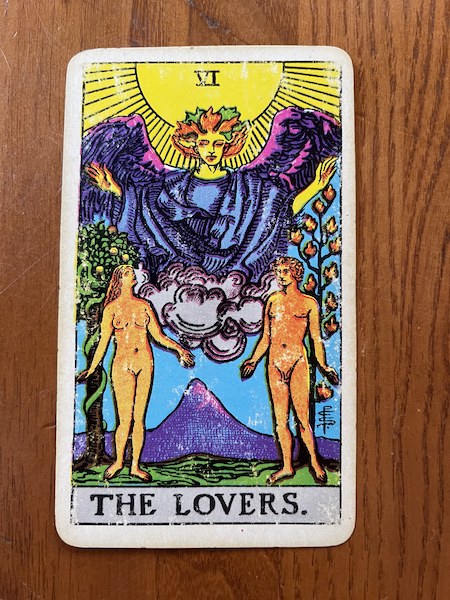 The theme of this Archetype is surprisingly rich, and also greatly misunderstood, so let us tease out the meaning here.

The keyword of The Lovers is choice. This choice point is a deeply spiritual and potent one. It denotes, on the highest levels available to anyone, the choice between the sacred and the mundane.

The ramifications of this choice speaks to the choices that appear in our personal and perceptional bubbles of reality, because until one is ready for this choice to appear, it will not appear as a choice. Instead, the default conditioning of the individual will take up the vacuum the awareness has left by not being present and engaged.

This archetype is also very rich in its suggestion of how our realities are Divinely expressed through polarities. We have the two genders, representing the male and female principles in their most primal states, flanking an angel above and in the center of the card, making a manifestational triangle. It is here, within this archeypically represented triangle, where realties are created and funneled into form, regardless of the subtleties we might observe about them.

Despite the artificially pushed agenda driven confusions being attempted currently on gender, at the core of all realities, both artificial and real, are the same Divine Principles. At any rate, this basic theme of polarities is also going to play out in 2021, for anyone who is able to raise their awareness to it.

I believe The Lovers archetype is the potent invitation to choose what is of value and to choose to bring forth our creational abilities into the natural expressions of polarity in our realities. To choose the sacred over the mundane and to really mean it is primary to this theme.

This means the sort of devotion to such choices that the mighty angel in this card suggests. Nothing about this archetype suggests that wobbling around or not choosing is going to produce anything good. Either path creates, as is indicated in the Divine Principle being represented here.

Original @ Notes From the Center of the Spiral